Despite two recent suicide bombings in May on a new police station in Husaybah, lraq, one police officer in the Iraqi-Syrian border town said his men are undeterred in their duties and are ready to work on their own.

“Ahmed." a 45-year-old police captain is one of several new officers in this city of 50,000 who has endured two attacks on the city’s district police headquarters, which has resulted in the deaths of and injuries to several policemen.

The first attack occurred May 2l when a man walked into the police station and detonated a vest bomb, killing five policemen and wounding five others.

Several days later, the station was attacked again—this time by a vehicle bomb, which detonated prematurely, killing two of the vehicle's passengers and wounding another. Three policemen were wounded in that incident.

The attacks came one month after the opening of the police station.

Despite the attacks, the lraqi cops are not discouraged concerning their duties.

“It is a lot safer in Husaybah now," said Ahmed, who recalled violent times in the city before coalition forces conducted a large-scale operation last November to rid the city of insurgents.

Now, officers are conducting independent operations, such as regular foot and vehicle patrols through the city, oftentimes without a large U.S. Marine presence to back them.

“l can walk the streets and not be scared for my life.“ Ahmed explained.

The handful of Marines assigned to work with and mentor the police agree. They say the police reacted appropriately during the bombings. They rushed to the scene to treat the wounded and secure the area.

“They got out into the street pretty quick, and they were doing everything they needed to do to take care of their people." said Staff Sergeant David J. Perry, the team’s operations chief. “They were immediately setting up roadblocks and checking people out.”

Just days after the second bombing. the police officers continued to show up for work and are receiving cooperation from citizens every day—a sign of progress toward stability, according to the transition team. 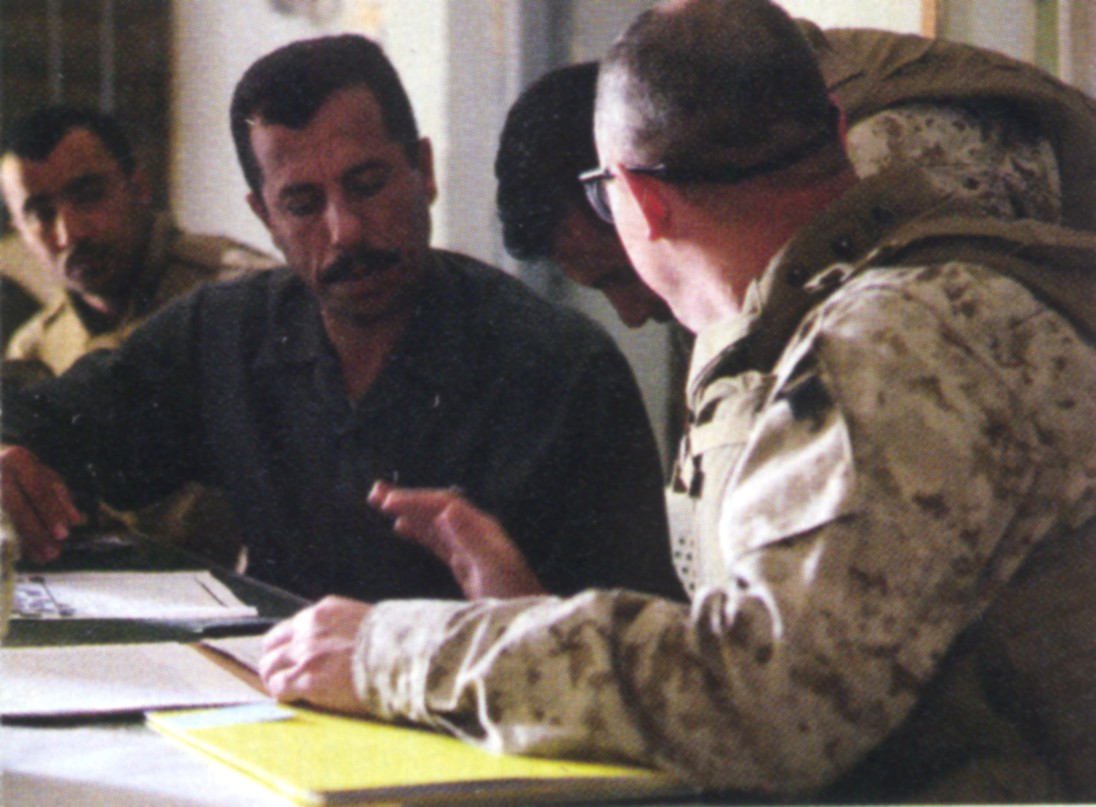 The police force was stood up earlier in May after its officers graduated from a six-month officer training camp.

Although the lraqi police still conduct regular security patrols alongside leathernecks, for the most part, the lraqis work independently.

“They are providing law and order in their city and are abiding by all lraqi laws." said Marshall. “These guys take initiative. and they are motivated despite the violence against them."

The men of 1st Battalion, Seventh Marine Regiment, assigned to provide security and assist lraqi Security Forces in the Euphrates Valley region in northwestern Al Anbar province. also have watched the police officers evolve and begin to take the lead in security operations.

“They are trying to match the job that the Marines and lraqi army are doing of providing security.“ said Second Lieutenant Chris J. Jamison, platoon leader with Company B.

Patrolling the area and providing security is a step-by-step process. said Jamison. "Teaching the police to do that job is tough. but they are motivated and they are starting to do things the way we do.“

Jamison and his Bravo Co Marines conducted foot patrols with the new officers for two weeks to establish a presence in the community and introduce the policemen as a new element of lraqi Security Forces.

Jamison noted that there is an added sense of security for his Marines when patrolling with the Iraqi police because the officers know the area and the people.

“They live here. They know who doesn‘t belong,” said Jamison.